Life can be quite dull at times. On the other hand, for those reading sequentially, I did leave university.

I am so fucking sick of University. I don't know why I went back, and I don't know why the fuck I stayed after week one and I realised I didn't want to continue. I can't stand report writing or essay writing. The programming topic is going through at such a speed that I just can't keep up with it. Massive assignment due tomorrow that I have barely started. Only a couple of hours to go until it's actually due. I will miss that unless I go and do an all nighter on it. And with work tomorrow, that seems a terrible idea.

Every time I am at work I realise how much I hate it, and want to do something that I -I don't want to say enjoy- but something that I don't despise doing so much. It's depressing me and getting to me to such an extent I am having trouble describing. I don't seem to be able to complain because in three years it's the only part time job I have managed to find, and I should be greateful for it.

I need to go University to get another job, and I need to work in order to push myself out of the poverty line that I have been sitting in for so many months. All I seem to do is work on assignments, go to work, and see my daughter in the moments when I wake up and go to bed. It's exhausting me, and I honestly cannot see an end to it. Doing two subjects at a time this undergraduate degree is going to take me another six years to complete. Longer if I don't manage to learn to program competently in the next twelve hours. I can't do this for six years, after four months I am drained and have run out of steam. Once I get in too far I won't be able to stop.

I would like to study something I like or enjoy. I did that of course, and that put me in the situation I am in now. And this is the best option I could come up with.

I am so fucking sick of this. I honestly can't remember a time here where I wasn't feeling unhappy. I need something to change, and I don't have a clue what that is.

It's been a LONG time since my last post.

I have started University. Started a part time job, and on the 13th of August.. Elizabeth Grace Climas joined the family.

So as you can understand sleepless nights, lots of poo and excitement. I promise to fill in the gaps soon 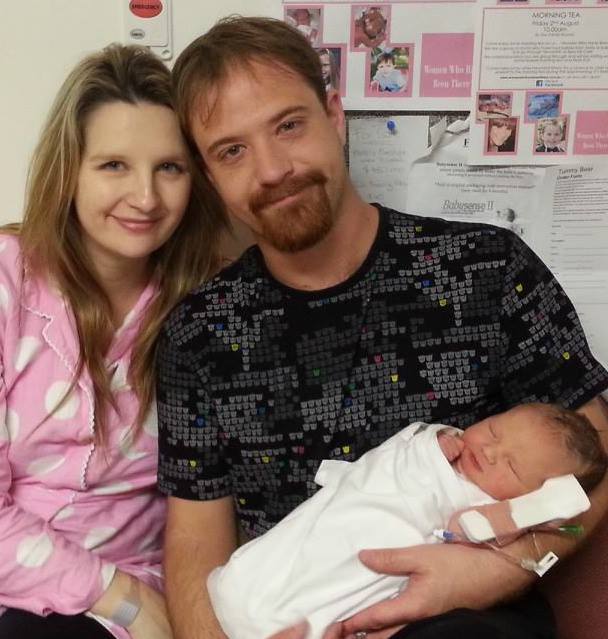 2. The Degree I am doing is starting off with a background level of knowledge far higher than my own. I will fall behind too quickly and not be able to keep up.

3. Working, baby, Uni. Too many things for me to manage. Other people have managed it in the past. I cannot however manage so many things at once. I need a handful of obtainable goals. Too many diverse things.

5. I have never managed to write an essay in my life, and I don’t think I am going to manage to start now. These things don’t become easier with practice.

6. I do not think it will lead to future employment, and is simply putting off going back to the unemployment agency for an additional three years.

8. I had forgotten how much I dislike working in/ at a University environment and how uncomfortable I found it trying to work there. Like trying to make a sandwich in a blender. Messy.

9. Time. I do not think I can dedicate enough time to something I strongly dislike, and will thus be continually unorganised.

What is the alternative? I don’t know.

I thought I was unhappy before I got a job. Then I got one. I won't go into details for legal reasons.

I was completetly and totally wrong. There are new unexplored depths to unhappiness that come with this. Obviously after three years it would have to be a pretty fucking spectacular job to meet up with my expectations. But all I have is an endless sinking feeling of; is this all there is in life? A few weeks in, and I want to give up.

I physically vommited during my break, and got a stress related blood nose no the way home. I know I NEED to keep going at it, but spend every waking moment in a panic ridden state knowing it is only a few more hours before I need to go back again. I am sure everyone in regular employment has this, and it's perfectly normal, and having so much freedom for so long has made it hard for me to click into time with the rest of the world again.

I just want something to look forward to- something that I can work towards, other than the simple fact that I need to work so I can work.

Since moving to Adelaide I have had my dreams crushed, and now I am being paid to be abused on a daily basis. It's like school but without the knowledge that you will get out after 12 years.

Still have left the course.

I currently have nothing on. No work of any kind. I am just sitting about waiting. I am not even applying for jobs at the moment. I know if you don't apply you won't get them. But I have writen THOUSANDS of job applications over the last three years and had next to no callbacks, certainly none in the last 12 months. Not a single one. I got an email this year rejecting me, and even that felt like a positive thing.

I have been trying to get into University. But didn't get in. Horrah. So now it's probably a matter of waiting until March next year before I apply again. Another six months of my life fucking wasted doing nothing.

I can't describe how frustrating this is. People tell you not to get ANGRY or FRUSTRATED with it and not to GIVE UP and GET DEPRESSED. But honestly there is only so long you can attempt to be positive towards the whole futile situation before you start setting yourself up for failure through your lack of sucsess.

I said this well over a year ago, but I feel like giving up.

Didn't last two days there and you are gone. I am so fuckinggoddamn sick of unemployment and being unable to get a step on the job ladder.

I have no idea what I am doing now.

I have decided to start a business. An odd sentence to start a blog post about. Especially for people who know anything about me. I have been trying to get out of media arts since I went into it. I have spent the last five months trying to get back into University and failing. I recall hating it quite a lot. However, given I can’t go to TAFE, and can’t find a job with my current qualifications, it seemed like my only choice.
I have been manufacturing more things recently, cutting, printing moulding. All that kind of thing for the Daleks. So I have decided to turn that into some kind of business. I have spend most of the last couple of weeks going to endless classes at job agencies, and I can’t stand it anymore. They make my head want to explode from boredom, and eat up so much of the week it isn’t funny.
So I have replaced that course with a ‘business’ course. I am starting it on Monday. I am very worried about it. I don’t think my idea has legs, and I have spent so much of my time avoiding trying to become someone who does that kind of thing. Finding clients, doing commission work etc. Sounds familiar? Well yes, because it’s exactly the same as VFX, only the work is much more physical and expensive. Is it a good idea? I don’t currently think it is.
I can’t get into University without taking high school classes again. I feel like I have been making posts complaining about that since 2004 now. (This blog is nearly 10 years old shortly. That’s a scary thought.)

The other news is: I am having a baby. I don’t think I have mentioned it here, thanks to making exactly one blog post this year, showing a completed Dalek. Not even a single thing about the process of making one. That’s certainly something.
We are twelve weeks away from the life changing event that is having a new member of the family. The road has been full of ups and downs, and Hannah has been going through it while I can only offer supporting hugs from time to time, and occasional cups of tea. It’s certainly something that is going to change my life forever.

But I need to do everything and anything to change my life and get an income three years of unemployment has changed me quite a lot, and has worn me down completely flat. It’s left me feeling exhausted, tired and unable to see past it. People constantly tell me it will pass, and if someone had told me three years ago that I would be in EXACTLY the same position as I was in three years time, only fatter, balder and significantly less happy, then I honestly don’t know how I would have coped.

I would love to say my business idea has filled me with a gusto that I haven’t felt before, but it feels like a solemn resignation that could potentially end with me in a far worse situation than I am now.

In other news, we went to Sydney harbour for a weekend, stayed at a backpackers and saw Hannah’s family. That was fun, but coming back to nothing has hit hard. I have spent every waking moment of the last three years working as hard as I can keeping my skills up to date, working solidly on projects, applying for work and just keeping my energy levels right up. ‘Making a job out of getting a job’, as they tell you. Something I have failed to do at an alarming rate.

Anyway. You might see this blog updated more. Starting Monday for seven weeks I away learning about being a capitalist.


Goodbye for now, but not forever blog.

Hello Tom! I do update this from time to time.

I built another Dalek. Stupid Aaron.

One thing has changed. Still looking for work. However, now we have a baby on the way, about 4 months in now. Exciting stuff. We find out the gender in a couple of weeks. So that's exciting.

I was really planning on going back to University this year to study teaching. I didn't get in. I have been putting off writing anything here until I found out more. But I just didn't get it. Damn.

It's probably just summer speaking, but I am hot, tired and have NFI what I am doing. I can't stand to spend another year doing nothing.